Beginning Aug. 27 through early January 2019, the Assessor’s Office will occupy the southeast corner of the Boulder County North Broadway campus at Broadway & Iris

Boulder County, Colo. - The Boulder County Assessor’s Office will be relocating temporarily to the county’s North Broadway campus effective Monday, Aug. 27 through early January 2019. The temporary move will allow for an extensive reconstruction of the Assessor’s current space on the second floor of the Historic Downtown County Courthouse at 1325 Pearl Street in Boulder.

The new location address starting Monday, Aug. 27, will be: 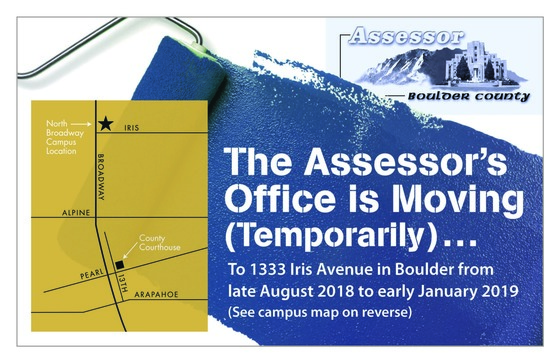 “The move has been scheduled to allow for our office space on the second floor of the Historic County Courthouse in downtown Boulder to undergo an extensive remodel with minimal disruption and impact to employees and members of the public,” said Boulder County Assessor Cynthia Braddock. “With technology advances and changes to processes in valuing all property within Boulder County, our office is greatly in need of improvements that will help make our work flows more efficient and effective for employees and members of the public to conduct business together.“

Braddock also noted that the move was timed to coincide with a timeframe within their two-year property assessment cycle when there are fewer “walk-in” meetings with members of the public. The majority of public visits will occur during the Board of Equalization appeals hearings, which happen primarily in September and October, and which will take place in the new temporary office space at 1333 Iris Ave. in Boulder.

Once the reconstruction project is completed, the remodeled offices in the Historic Downtown County Courthouse will feature improved areas for the public and employees to meet and complete transactions related to property valuations and other responsibilities of the Assessor’s Office. 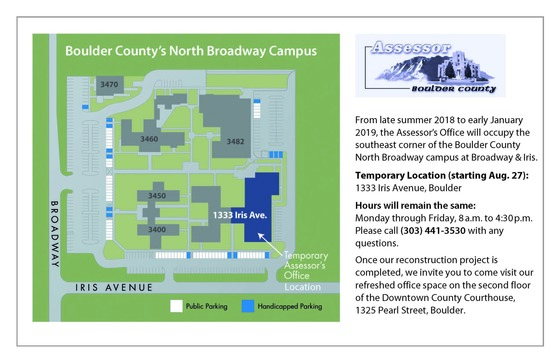