Help improve safety along Jay Road by taking a survey

County planning to implement improvements this summer and in the future

Boulder County, Colo. - Jay Road in unincorporated Boulder County sees some of the highest volumes of motor vehicle and bicycle traffic in the county, which, unfortunately, has resulted in several incidences of motorist/cyclist crashes.

This summer, Boulder County Transportation will implement improvements on Jay Road in an attempt to provide a safer space for all travelers along this important east-west corridor. In addition, we’d like to work on improvements that would need to be implemented over time.

We are asking for the public to provide feedback on all of the proposed safety improvements. To make it easier to provide input, we’ve developed a short survey. The survey will remain open until 11:59 p.m. on Sunday, May 13. Survey results will be posted to the website shortly after it closes.

Visit www.JayRoad.org to take the survey.

“We’ve heard from cyclists and motorists alike that travel on Jay Road can feel dangerous and we’ll be installing some pedestrian crossing improvements on Jay between the Diagonal and 28th, but there have been several terribly unfortunate crashes in the past year that have focused our immediate attention also to the east,” commented George Gerstle, Boulder County Transportation Director.

“First and foremost, while it is important that everyone, both drivers and bicyclists, pay close attention to their surroundings at all times, we’re also going to try to make it easier for drivers to know where they can expect to see riders and pedestrians, and also give cyclists a buffer so they feel safe using Jay Road. Providing roads that are safe for all users is the primary goal of Boulder County Transportation. We take any crash seriously and do our best to understand why it happened and how it may have been prevented,” added Gerstle.

Examples of improvement options are shown below: 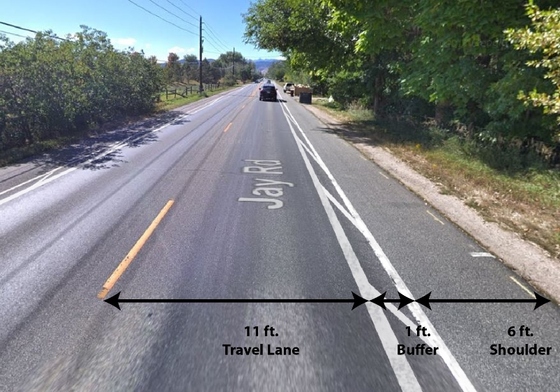 Example of a mid-"block" improvement to visually separate the bike lane from the road. 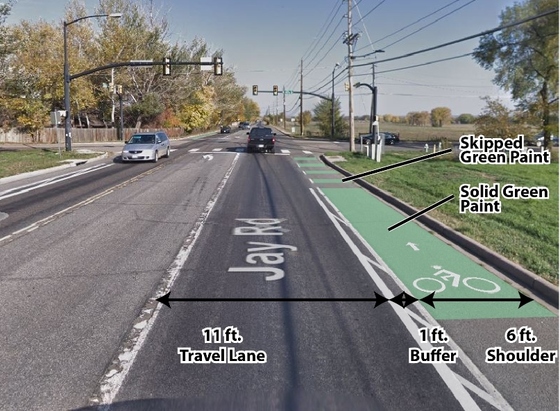 Example of an intersection improvement to provide more visual separation between the bike lane and the turning lane.