Boulder County Sheriff’s Office is testing out use of Tesla as a patrol vehicle.

Fuel cost and maintenance anticipated to be lower than current vehicles

Boulder County, Colo. - The Boulder County Sheriff’s Office is excited to announce that, with the support of the Boulder County Commissioners, we will be testing a 2021 Tesla Model Y Long Range AWD as a patrol vehicle. We are keenly aware that many people perceive Tesla vehicles as “luxury vehicles,” and while that is true for a large segment of their product line, Tesla’s mission has been the proliferation of electric vehicles (EVs) into the mainstream market. As such, Tesla vehicle prices have become much more affordable in recent years. Additionally, the specifications are comparable to the current Ford Police Interceptor (PI) SUVs currently in use for patrol, while providing exceptional safety, performance and reliability.

While the initial cost of a Tesla is higher than the Ford PI SUV, research and anecdotal evidence shows that the initial cost difference is made up within 6-18 months due to the significantly lower operating and ownership costs of the Tesla. Due to the simplicity of design and lack of moving parts, the Tesla is also expected to have a much longer service life than its internal combustion engine (ICE) counterparts. Law enforcement vehicles spend a great deal of time idling and engaging in sudden start/stop driving, which for ICE vehicles consumes significant amounts of fossil fuels and produces a lot of wear and tear on the engine components. Our data shows that over the average life of a patrol vehicle (5yrs/105,000mi), the Ford Police Interceptor’s fuel and maintenance costs equate to roughly $0.187 per mile driven, while the Tesla Model Y’s operating and maintenance costs equate to roughly $0.029 per mile driven. That equates to roughly $19,635 in fuel and maintenance costs for the Ford Police Interceptor SUV compared to only $3,045 for the Tesla Model Y.

Several law enforcement agencies around the country have started to pave the way for the adoption of Teslas and other electric vehicles for their purposes. Boulder County has always strived to be eco-friendly in all our operations, and we continue that commitment by being one of the first, if not the first law enforcement agency in the State of Colorado to bring a Tesla Model Y into our patrol fleet. Additionally, a portion of the vehicle’s charging will be offset by electricity provided from solar panels, reducing its carbon footprint even more. For those concerned about the environmental impact of the batteries, 90+% of the battery components are recyclable once the battery pack reaches the end of its useful vehicle service life, which is anticipated to be well over 500,000 miles.

The vehicle has been outfitted with official Boulder County Sheriff’s Office decals as well as a full suite of emergency equipment like that used in many of our other vehicles. It will primarily be assigned for traffic enforcement, though it will be rigorously tested to examine its potential for other applications within the Sheriff’s Office. Our research included examining EV offerings from other manufacturers, but they were ultimately eliminated from consideration due to significantly higher price points, lack of availability, and/or specifications that did not meet our needs. We are open to reconsidering them in the future as the EV market expands. 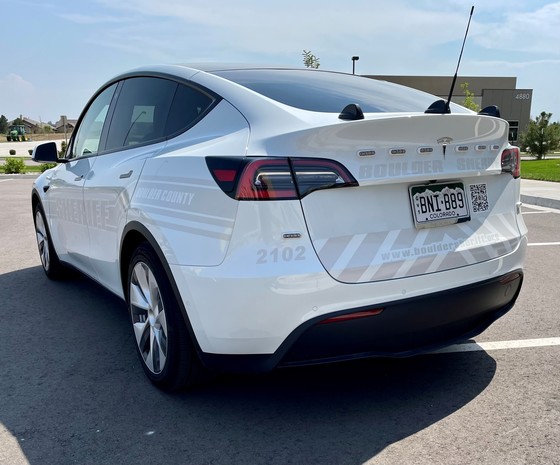 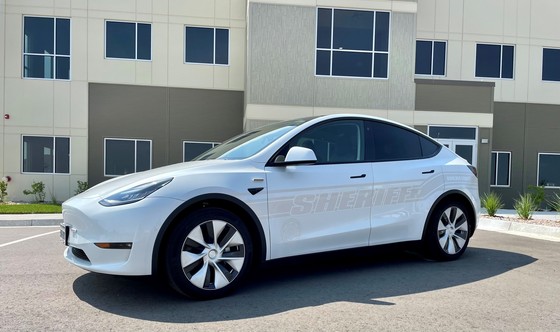